Eb-1: Evidence of Your Performance of a Leading or Critical Role in Distinguished Organizations 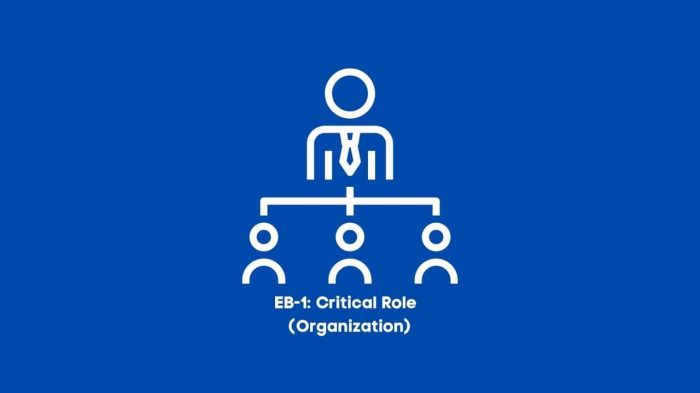 Are you enjoying the EB-1 series that the “Sethi and Mazaheri” law firm has been bringing for you lately? Here, we are back with yet another article of the EB-1 series explaining the criterion, “Evidence of Your Performance of a Leading or Critical Role in Distinguished Organizations.”

Before collecting evidence as a foreign national seeking to claim the “Lead or Critical Role” criteria, there are a few things to consider. USCIS opined that in evaluating the evidence for a leading or critical role, one must examine the position for which the foreign national has been hired or appointed to fill the organization or establishment.

Let us discuss the essential elements of the criterion:

What do you mean by an organization or establishment having a distinguished reputation?

For example, you can attach proof that your organization or establishment has been considered among top rankings in their field of work if they have been listed in some journals or reports. Likewise, any previous awards received for the products or services or evidence of control over the industry can be submitted as pieces of evidence to prove that the organization or establishment has a distinguished reputation.

The factors like the size or longevity of the organization or establishment are less relevant as the vital determination is made on the distinguished reputation in their field of work.

What is Leading or Critical Role in Distinguished Organizations and how can you satisfy it?

As the word suggests, you should be playing a role leading some group, project, or team. An organization or establishment has a hierarchy of employees assigned different functions according to the organization’s needs. If you want to satisfy the USCIS Officer about your leading role, you must prove your leadership skills and tactical ability to make decisions in difficult situations.

Remember, the USCIS Officer wants to see the situations when your position has played a crucial role in the organization’s functions.

What is a critical role, and how can you satisfy it?

Compared to proving one’s leading role in an organization or establishment, confirming that your role has been critical is not easy and often becomes complicated for the petitioners. That is why taking help from an experienced immigration attorney often rescues you from the complexity.

This criterion requires substantial evidence to prove your credibility as a leading or critical role in a reputed organization or establishment. In this article, we have covered the questions we mainly asked regarding establishing this criterion. We hope that this article is worth reading for you and has cleared your doubts about this criterion.

Immigration attorneys at Sethi and Mazaheri law firm aim to help people with their visa applications and guide them on their usually face problems. If you have any other doubts about this criterion or any other criterion for an EB-1 visa, you can message us directly. Our experienced immigration attorneys will be delighted to guide you through the entire process and be a part of the successful approval of your visa application.

Do I Need an Artist Visa to Attend an Artist Residency or a Fellowship?

NIW: Complete Guide to the EB-2/NIW